I spend way too much time on the Nifflas Support Forum and I have way more stars than anyone else. As I approached the 100 star threshold some of the other heavily starred members decided to make a KS level in my honor.

Although most areas of the game used graphics I have made in the past, some designers made their own graphics. 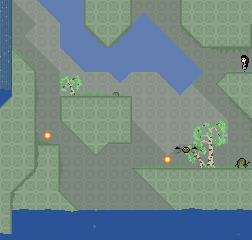 The Coins of KS+ were graphically overridden to appear as Stars. 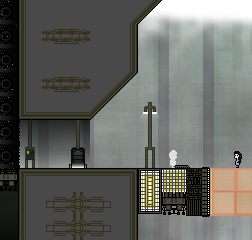 Look closely. The lamp post and other details resemble my icon.

Over at the Nifflas Support Forum there is a karma system. When members make a good post other members can thank them by giving them what is known as a hidden star. Well, I spend way too much time on that forum and I have way more stars than anyone else. As I approached the 100 star threshold some of the other heavily starred members decided to make a Knytt Stories level in my honor.

Being a collaborative effort the level consists of several stitched-together areas, each representing a contributor. You will find little immersion here. Cutting humor, fun challenges, and pretty graphics are the call of the day. Being a tribute level to me, you’ll find that most areas include my graphics. More importantly the level was built for Knytt Stories Plus, a KS mod I made. The designers used many of the features special to KS+ to create unique challenges and effects. Foremost of these is the use of collectibles. Your main task as a player is to explore the world searching for 100 stars and 10 golden creatures.

Spoilers be here so you may want to stop reading if you haven’t played the level yet. There are many inside jokes in this level that casual members of the Knytt Stories community may not get. I will endeavor to explain some of them. Firstly, there is a KS creature that looks like a slice of toast. In all my KS levels I include “Toasts” which give out silly facts. I have an unfinished level, The Tree of Knowledge, which I have been working on for way too long. “Zen Taco” is a reference to an old forum member “TheAlmightyZenTaco”. “Poka” is a partial of “Pokapola”, a softdrink found in the KS level Too much Soda. There is an obscure reference to this. There is some Dutch text in one section, it’s supposed to be unintelligible to most players and therein lies the humor. Finally there is some ingenuous animosity towards me for having so many more stars than the common rabble.