A pit stop between adventures becomes a bit of an adventure itself. Follow Juni as she traverses a swamp in search of refreshment.

A pit stop between adventures becomes a bit of an adventure itself. Follow Juni as she traverses a swamp in search of refreshment.

A long time ago I made several Knytt Stories tilesets for an aspiring level designer. One of these was a swamp based on Fredrik Andersson’s Thin Forest tileset. Through the Swamp was conceived as a nice way of releasing these graphics. And though it certainly is that, Through the Swamp has managed to become a charming level that can stand proudly among my best work. It’s available in 2 versions. The mono version is for those with low bandwidth.

These graphics were made for a request on the Knytt forums. Someone was making a game involving a yellow submarine. 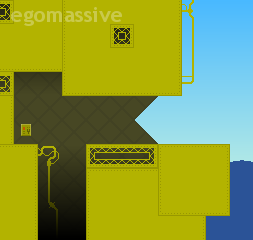 Ooh! It’s yellow and it’s in the water. Notice the rivets, It uses a two-layered ground design technique. 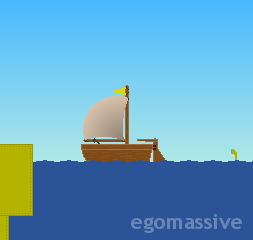 A hero needs a way to get to and from waterborne monstrosities. Especially since most adventurers can’t swim. 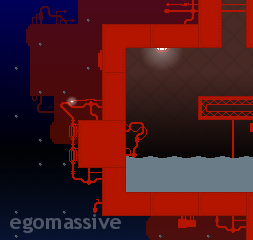 I hope it doesn’t rust through! This is the red version. The distant objects are semitransparent to help show that some of the water between here and there is in front of them.

~ These graphics were made for a request on the Knytt forums. Someone was making a game involving a yellow submarine. This someone wanted a graphics set with the look of “An Underwater Adventure”, a Knytt Stories level by Nifflas, to construct their submarine. I loved the feel of that level, so I wanted to see if I could imitate it without ripping it off.

~ My end result was rather good I think. The originals by Nifflas had dark contact areas and light or pitch-black backgrounds. It was very mysterious and cold. Since mine had to be yellow, I settled on a medium darkness for my contact areas. This allowed the interiors to be very bright or very dark. One thing I don’t love are the eye-sering visuals of The Yellow Submarine movie. As a result the yellows in my tileset were muted. Now, I had to consider that the game designer requesting the graphics probably intended to homage the movie in some way. So, in an attempt to stay true to the movie’s visual assault, I added alternate purple interiors.

~ As far as submarines go, the graphics are a bit lacking. Submarines should have curved exteriors to help navigate the ocean currents and resist crushing pressure. A curved shell would put a huge demand on tileset real-estate. Also, I wanted to make the set a little bit multipurposed. There’s no sense doing all this work for free if it can only be used for one game in a limited way. Finally in that spirit, I made a matching rust colored set. It’s always helpful to have a little graphical diversity yet matching style when building a game.

These graphics may be used, edited, or borrowed for Knytt Stories levels. Credit is required. Here they are: Submarine Tilesets

This is a Knytt Stories tileset I created to compliment the Mertynn tilesets made by Markham Carroll. 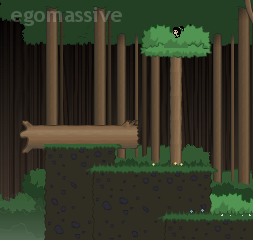 This shows how my tileset and gradient fill in the background to make a dense forest. 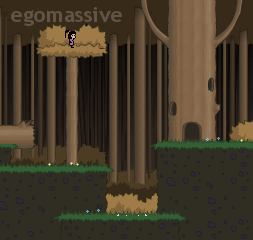 The same screen redone with the gloomy brown foliage. Be careful of the pit, those are teeth poking up! 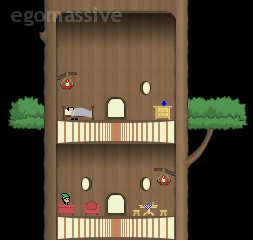 Here you can see how the interiors shape up. Looks like those little Knytts live quaint and comfortable lives. 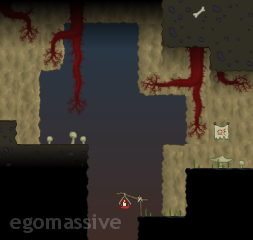 For the underground I made what else but tree roots.

~ This is a Knytt Stories tileset I created to compliment the Mertynn tilesets made by Markham Carroll. I made most of the graphics in this set for A Knytt in Time, my first Knytt Stories level. The complimentary graphics were spread across several tilesets which catered specifically to my level’s needs. I liked the Mertynn parts I made so well that I decided to release them as a set for other Knytt Stories level authors. After gathering them all together there was still room left. So, I filled the rest of it with more goodies.

~ Of course, this couldn’t be released without Markham Carroll’s blessing. I’m happy to say he gladly agreed to it. It’s usage rights are for Knytt Stories levels only. Edits are not allowed. Markham and I, egomassive, should be credited where it is used. Thanks.

~ The tileset is zipped up with it’s accompanying gradients here: mertynn.zip