A basic survival-on-a-deserted-island story. Your focus is on the necessities of life and rescue. As the game progresses though, some mysteries start to develop.

Shipwrecked is a Knytt Stories level I made for a competition on the Nifflas Support Forum. The rules were simply that a certain tileset, A Beach and a Cave by Paul “Ripen” Noumowics, had to be used on every screen of the game. With 10 days left in the competition decided to take on the challenge and win it. 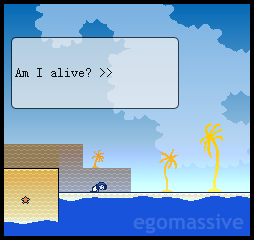 The hero of our story showing off her custom animation. 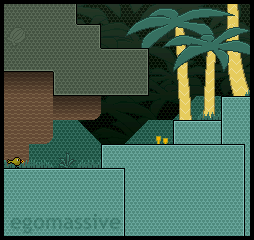 Deep in the jungle lies a cave entrance.

Shipwrecked is your basic survival-on-a-deserted-island story. Your focus is on the necessities of life and rescue. As the game progresses though, some mysteries start to develop. The island has a complex and dark history which is far more dangerous to our shipwrecked interloper than the initial struggle. In the end you’ll pit yourself against the evil that lurks on the island in an attempt to put things right.

The gameplay is in chapters which isn’t too common among Knytt Stories levels. Even less common, every cutscene happens in-game including full screen images with animation. In addition to this the game is filled with custom animations and graphics inspired by the A Beach and a Cave tileset. The ambiance is almost entirely original and really sets the level apart. Most of the game doesn’t have music because the ambiance fills the sound-scape so well. As music goes there is a memorable classical guitar track and an original tribal drum track. The simplicity of the instrumentation matches the simplicity of the environs and remoteness of our lonely survivor.

The level was originally released in May of 2010 as a beta. It won the competition it was made for, and has been hailed as one of the top Knytt Stories levels. Knytt Stories and the levels made for it are always free, so download and enjoy. If you like this level look for Harvest by Farik. It was a major inspiration for Shipwrecked. Finally, if you like the classical guitar track as much as I do, you can get a free high quality version at musopen.org.